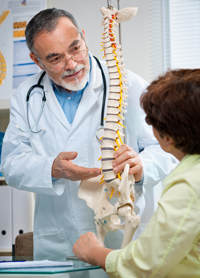 The bureau brought an administrative complaint, alleging that the examining chiropractor was negligent and lacked good moral character. The Board of Chiropractic’s disciplinary subcommittee imposed a one-year term of probation. (The Public Health Code authorizes health professional boards, acting through their disciplinary subcommittees, to impose disciplinary sanctions against licensed professionals.) The Court of Appeals reversed and remanded the case with instructions to expunge the chiropractor’s record.

First, the Court of Appeals looked at the Public Health Code’s definition of negligence, i.e., “a violation of general duty.” The court concluded that the examining chiropractor did not owe any duty to diagnose or treat the patient. Instead, his only duty was to perform the independent examination requested by the insurer in a manner that did not physically harm the patient. Because there was no evidence that the examining chiropractor violated this limited duty, the Court of Appeals held the finding of negligence was erroneous.

Second, the Court of Appeals discussed the definition of “good moral character,” i.e., the “propensity on the part of the person to serve the public... in a fair, honest, and open manner.” The court held that the examining chiropractor’s unfavorable comment to the investigator was not “unfair, dishonest, and secretive.” Rather, he was only offering a candid and honest opinion during the interview.

The licensing boards and Bureau of Health Professions act responsibly and fairly in most cases. However, as shown by Serven, that is not always the case. Given the fact that a licensing sanction can cause substantial and irreparable harm to a health professional’s career and reputation, the Court of Appeals’ willingness to carefully examine and enforce the statutory language and reverse the licensing sanction is welcome and much-needed.

Richard Kraus has 30 years of experience in the area of health care law, with special emphasis on licensing investigations and disciplinary actions. His representation of individual health care professionals as well as hospitals, health systems, long term care facilities and multi-practitioner clinics, provides an understanding of clinical and business realities in health care as well as legal and regulatory requirements.