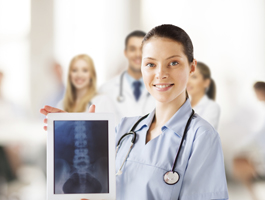 One of the healthcare industry's newest tech innovations, called Figure 1, is the brainchild of a doctor named Josh Landy. Figure 1 is an Instagram-style app that allows doctors to share photos of patient conditions with other medical professionals in order to get their opinions regarding diagnosis and treatment.

This article details how Landy was inspired to create Figure 1 after observing all of the "off-the-cuff consults happening in hospital hallways where doctors would try and talk through the details of a case that was surprising or new to them."

More than 115,000 people are using Figure 1. Most are healthcare professionals, but it is estimated that 10 percent are non-healthcare users. Only doctors can comment on cases.

Like many tech innovations in the healthcare space, apps like Figure 1 raise privacy fears. After all, most people would not appreciate having photos of their conditions broadcast to thousands of others - doctors or not. According to Landy, Figure 1 addresses these concerns in two ways: doctors must get permission to take a photograph, and no identifying details can be shared.

As you might expect, Figure 1 is not the only disruptive player in this space. Doximity is a social network exclusive to doctors that allows physicians to collaborate on patient treatment. Another startup, Sherpaa offers patients medical consultation online and over the phone.

As healthcare technology continues to evolve, it becomes increasingly important to ensure that policies are in place to keep patient information secure.